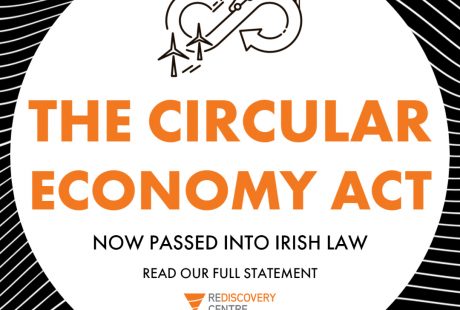 The Circular Economy Act is the first piece of legislation in Ireland to provide a statutory basis for the development of a circular economy and a shift away from wasteful behaviour.  Having provided extensive feedback on the Act from its early stages of development, the Rediscovery Centre warmly welcomes its publication as well as the cross party support it received during its passage through the Dáil; a clear signal of the Government’s commitment to this area.

The legislation introduces a number of interventions that will directly impact on our everyday lives, including levies and measures that will help citizens shift away from single use packaging with an initial focus on disposable drink cups. Providing good news for the sector, it also paves the way for a national reuse target that will aim to boost sales of second hand goods. Additional consumption, reuse or repair targets are also proposed for construction, agriculture, retail, packaging, textiles and electronic equipment.

Such targets – due to be included in upcoming national waste plans – will make it easier for citizens and businesses to move from recycling to reducing consumption, reuse and repair, activities at the very heart of the circular economy. Key to the success of these targets and to supporting citizens and business in meeting the ambition of the Act, will be the Circular Economy Fund. This fund ringfences funds through the Act to support circular economy measures. Also key to success, the Act ensures that plans made by the Government and the EPA are regularly reviewed and updated to underpin commitments they contain.

“While this latest announcement is encouraging, it is disappointing to see “waste-centric” language feature so heavily within the Act. Reflecting the European legislative focus on design, it will also be important that subsequent legislation and strategy focusses on this area.”

As a framework piece of legislation, the Act will place Ireland in a leadership position on the circular economy in Europe. If implemented effectively, this Act could prove transformational for Ireland’s economy and for the wellbeing of its citizens. The Rediscovery Centre, as the National Centre for the Circular Economy, looks forward to working with the Government, citizens and businesses in leading this transition.

Find out more about the details of the new act on the Department of the Environment, Climate and Communication website here.