A large airy community centre in the middle of the Charlemont Street flats housed a ladies group furniture restoration workshop led by Gerard Griffin, head of Rediscover Furniture. As the complex is currently in the process of redeveloping some of the flats, there was ample material to be upcycled and reused.

The workshops ran for three hours each on the last two Thursdays in June. Gerard led the group through the various steps of furniture upcycling, from how to identify items with restoration and reuse potential to a how-to on removing old finishes and applying new ones. He shared a few tips on repairs, and the group had a chance to stencil using old net curtains and recycled paint provided by Rediscover Paint.

Along with the practical and technical skills of furniture restoration, these workshops also show exactly how the circular economy benefits both the environment and the community; by reusing materials from the Charlemont Street flats as they are redeveloped, Gerard and the ladies group diverted waste from the landfill and additionally made it possible for a bit of the history of the old flats to move into the new ones.

Rediscover Furniture hosted three full-day workshops over the course of a few weeks in May in the Estuary Recycling Centre in Swords, an apt venue for the reuse workshops. Head of Rediscover Furniture Gerard Griffin and two trainees, Craig Teeling and William Graham, led the Swords Tidy Town workshop which was funded through Local Agenda 21.

The participants could bring items from home to refurbish or could choose from a selection provided by the Rediscovery Centre. The group began by stripping the old finishes and applying new ones. A few of the pieces needed some repairs, so Gerard and the team discussed wood gluing, including which glue to use and how best to use it. Once the repairs were completed, the refinishing began, which, depending upon the piece, included French polishing, varnishing, and fine paint work.

The participants were delighted, with the end result of their refurbished pieces and they will additionally be able to use their newfound skills to benefit their Tidy Towns activities. The reuse aspect of the course is doubly important in that communities who reuse can earn extra Tidy Towns points!

In addition to holding workshops, the Rediscover Furniture team refurbishes donated furniture for resale. If interested in donating or purchasing furniture, or taking part in one of our reuse workshops, please contact Gerard Griffin at gerard@rediscoverycentre.ie for more details. 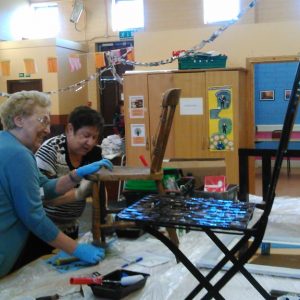 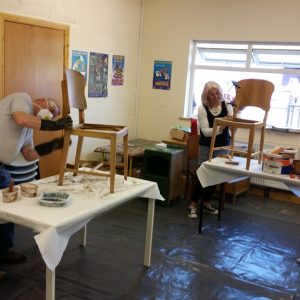 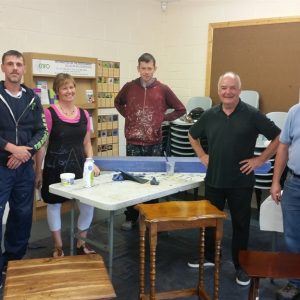