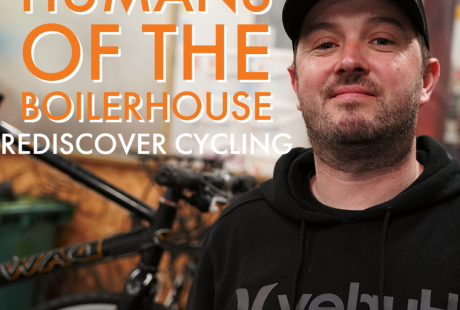 Humans of the Boiler House: JP

‘For me, it’s my main mode of transport. I don’t drive and even if I did, I think I’d still use the bike a lot more, because I think it’s just essential around Dublin. And even as a kid as well, I always had a bike, everybody had a bike. You can get places quicker and it’s just easier to get around.’

‘When COVID hit I was a bar manager, and I did that for years. I always liked working with my hands. I just started it as an opportunity, and it’s very hard to kind of get out of something that you have a lot of experience in. Then Covid gave me the opportunity, and kind of the kick up the bum really, to do something different, that I’ve always wanted to do. It’s a relaxed environment here, which I needed I think for years, it’s different but in a good way. You feel like you’re making a difference.’

‘There’s been a few [favourite bikes I’ve worked on] like a little kid’s specialised one. I enjoyed working on that because it’s just a really cool bike… I was actually like, going home and thinking I can’t wait to work on that tomorrow. I was thinking to myself, I’m gonna hold on to this for my kid for like 10 years.’

‘I suppose my least favourite thing would be seeing some of the ways that bikes are built, and the cheap parts that go into them, it’s no wonder people just throw them away. You know, just corners being cut by companies, it’s disappointing, like plastic parts being used, very frustrating from an assembly and disassembly point of view. It’s kind of sad to think that they’re putting those parts into bikes, especially the kids bikes. Because I understand that kids grow out of bikes, but that doesn’t mean you should think that’s not working anymore, just throw it out. So that and gears, when I don’t know what’s wrong with them… The tiniest little thing can throw them off. But then the tiniest little thing can fix it, and it’s trying to find  the balance.’

‘I suppose the favourite thing would be the end products. It’s seeing a bike that, you know, is relatively on its last wheels, and just stripping it down and starting again and seeing the end product that hopefully works well. It’s just a sense of achievement, I suppose, bringing something back to life.’

Keep an eye out for the next instalment of Humans of the Boiler House!

Rediscover Cycling traineeships are organised in conjunction with Pobal CSP.