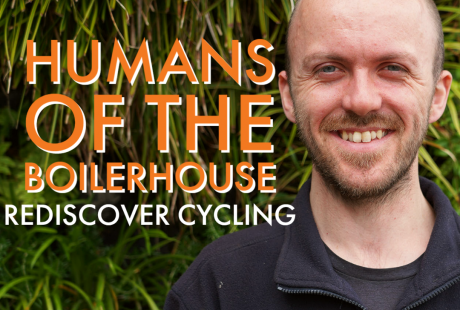 Humans of the Boiler House: Mark

The Ballymun Boiler House is full of creative and inspirational craftspeople. People who have found their way to the circular economy through all walks of life.

To celebrate them, we are  kicking off  our  ‘Humans of the Boiler House’ series by sitting down with our talented Rediscover Cycling team to learn about their journey to the Rediscovery Centre, and the highlights of their work here.

A bike owner since his teens, Mark has been cycling for most of his life, and considers it an essential part of living in Dublin: ‘just the handiness of it, you’re not restricted by timetables, or the cost of it, and  you get your exercise in. The impact of it as well, like, I try to avoid driving whenever possible, cycling instead, it’s a minimal impact environmentally, getting around.’

‘I got into bike repair by accident. I was studying music in college, and I was looking for a volunteer opportunity during the summer. There was a bike shop & café that you could volunteer in, and I volunteered in the café. The bike shop was much busier than the café, and I just slowly integrated myself into it more and just started repairing bikes… It was a nice difference from studying an art because it’s much more tangible, like you get to do something, make something, get that one-to-one with customers, to make a difference to them. People can just really be very thankful to get back on because like, it could be their mode of transport and their freedom.’

‘My least favourite thing [about bike repair] is probably when there’s information that I don’t have that will allow me to fix the bike that the manufacturer knows, the people who designed it know, but I don’t have a way to access that, it’s not freely accessible….. So that can be frustrating, because it just slows you down, when you know, you could be working a lot faster. It’s not that we need more standardisation, just more accessible information.’

My favourite thing [about bike repair] is when you have to DIY a tool to get something to work, or to get something out. Like, you know, something doesn’t work and you need to use other parts of bikes to clamp it all together just right…. working smarter, not harder.’

Mark sees a great opportunity for social enterprises wishing to focus on bike repair: ‘The business is focused on a social impact, and bikes are a great way to have a positive social impact… allowing people freedom, or an environmental choice, or teaching people [to repair] themselves. And through being able to provide bikes at a lesser cost than elsewhere, it marries well’ [with the ethos of social enterprises, mission-driven businesses existing to bring about social impact].

Keep an eye out for our next instalment of Humans of the Boiler House!

Rediscover Cycling traineeships are organised in conjunction with Pobal CSP.