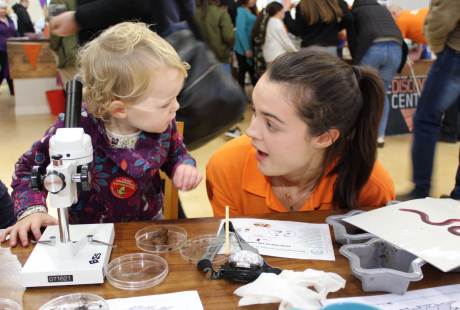 The Rediscovery Centre and Global Action plan hosted the annual Let’s Talk Science Festival on the 16th and 17th of November 2018. It was the time and place for a most wonderful exploration of what we need every day and yet so often take for granted – food. More specifically, the science behind food. There’s science behind everything, of course, but when it comes to eating, do we really think about it all that much? Who wants to spend time thinking about it when you could be eating it?!

The Rediscovery Centre and Global Action Plan wanted to have our cake and eat it.  We wanted to encourage people to think about the science involved behind some of the food that we eat. By doing so we aim to promote public awareness and interest in science and technology, ultimately to encourage the next generation of scientists and engineers in Ballymun and in the wider Dublin community.

The science festival took place in the Rediscovery Centre. We invited a whole host of experts in the fields of food and food science. The guests included the Dublin Institute of Technology, Imaginosity, Agri Aware, Dublin City University, Airfield Estate and Tallaght Institute of Technology. Together with Global Action Plan, we at the Rediscovery Centre also put on our own exhibits, that were designed to engage, educate and excite.

The first event was an evening affair, on the 16th of November, which was aimed at adults and included a variety of demonstrations, information stands and hands-on activities. We sometimes forget that adults can still retain the sense of curiosity that children have but don’t often get the chance to use it, so we felt it was a great opportunity to engage with them on the hidden wonders of the every day. It also presented us with the chance to explore more adult-orientated activities such as the science behind brewing beer.

The second event was the big family event on the 17th of November and it was open to all. We were expecting a big crowd and we weren’t disappointed. Over 400 people attended the festival and it’s fair to say that they were well looked after. Our nine exhibitor stands hosted some 30 hands-on activities in addition to four separate shows from Imaginosity. Children and adults alike were invited to make their own mozzarella cheese, learn more about composting their food waste, examine the difference between regular bread and the gluten-free variety, discover how important bees and worms are to our food supply with our biodiversity jenga game, increase their knowledge about the science behind smells; the list goes on and on.

In between all the activities, we were sneaking in some solid education too and, by associating science with fun, hoped to break down any of those silly old stereotypes that people might have about science being boring. Children and young people can associate science with investigation and adventure, than with lab coats and log books.