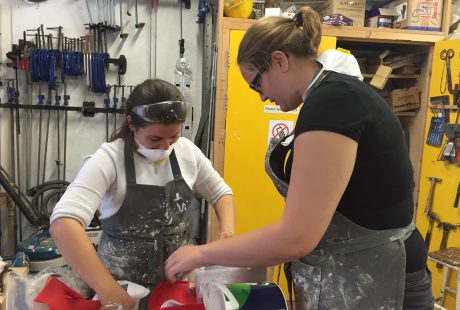 The Reuse Academy is a partnership between the Eastern Midlands Regional Waste Office and the Rediscovery Centre to promote reuse skills in areas such as furniture upcycling, fashion upcycling and bike repair. The Reuse Academy has a limited number of courses being offered free to groups in the following local authority areas: Dublin City, South Dublin, Dún Laoghaire-Rathdown, Fingal, Louth, Meath, Longford, Laois, Westmeath, Offaly, Wicklow and Kildare.

These FREE courses will be facilitated by skilled trainers from the Rediscovery Centre and they are suitable for community groups, charity shops youth clubs, men’s sheds and secondary schools. The courses provide a fun and creative way to find new uses for old items. Each workshop participant will leave having learned a new skill. The furniture, bike and fashion upcycling workshops help to reduce the amount of items going to landfill, instead giving them a new lease of life. The fashion workshops, which will teach participants how to repair and modernise clothing and are a particularly popular offering of the Reuse Academy.

In addition to fostering creativity, reusing materials has excellent potential to create jobs within communities and the Reuse Academy courses can be tailored to include advice on starting a reuse social enterprise or micro enterprise in the community.

Speaking about the partnership, Hugh Coughlan, co-ordinator of the Eastern-Midlands Region said “Working with the Rediscovery Centre, the EMWR has developed the reuse academy to help building reuse capacity throughout the region. The programme aims to provide training and support to early stage projects and individuals engaged in reuse activity.”

Sarah Miller, CEO of the Rediscovery Centre, stated that “The Reuse Academy is a great opportunity for community groups to work with the Rediscovery Centre and to learn from our highly skilled trainers and our experience working in reuse over the past decade. With the generous contribution from EMWR we can now provide these workshops free of charge which removes the main barriers community organisations face in accessing these great workshops. Places are limited and as always the courses will be really popular so we would encourage groups to book as soon as possible.”

Groups can book a place on the REUSE Academy by contacting their local authority Environmental Awareness Officer or through Joanne Rourke, Resource Efficiency Officer with the Eastern Midlands Regional Waste office at joanne.rourke@dublincity.ie .

The Eastern-Midlands Waste Region (EMWR) in one of Ireland’s three waste management regions. The EMWR spans an area equal to one fifth the total area of the country and serves approximately half the national population, over 2.2 million people. The urban/rural population split in 81%/19%, however in some local authority areas within the region there are more rural than urban residents (eg. Laois, Longford, Offaly and Westmeath). The region consists of 12 local authority regions: Dublin City, Fingal, Dublin South, Dún-Laoghaire Rathdown, Kildare, Laois, Longford, Louth, Meath, Offaly, Westmeath and Wicklow.