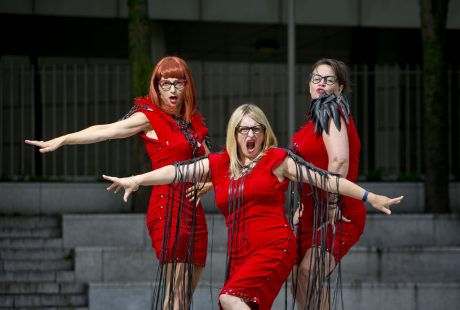 Last Monday, September 3rd, we were delighted to be part of the Launch of National Reuse Month 2016 with Minister for Communication, Climate Action and Environment, Denis Naughten, TD opening the launch.

National Reuse Month is a new waste prevention initiative organised by the three Regional Authorities to raise awareness about the economic and environmental benefits of reusing everyday items and materials that would otherwise go to waste. Throughout October, there will be local and regional workshops and exciting events all over Ireland to promote ways for families, businesses and communities to reuse. Donating, refurbishing and repairing items are all forms of reuse and offer people a chance to save or make money, get creative, learn a new skill and do their bit for the environment.

For the launch, Rediscover Fashion, the queens of textile reuse and upcycling were asked to reuse and redesign old stage costumes belonging to the Nuala’s who were performing at the event. Using everyday waste materials such as bike tubes, cds and warped vinyl each costume was lovingly blinged and transformed.

CRNI were also on hand at the launch encouraging the audience to make a pledge for #reuse16. Carrie Ann from the fashion team was snapped making her pledge to bring her own coffee cup everywhere she goes. Further information about making a pledge for #reuse16 can be found at:
http://www.crni.ie/2016/08/make-a-pledge-for-reuse-month-october/

The Rediscovery Centre is also delivering a wide variety of workshops and events during Reuse Month. Keep an eye out on our blog, Facebook page and Twitter for details! 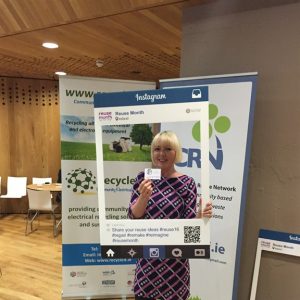 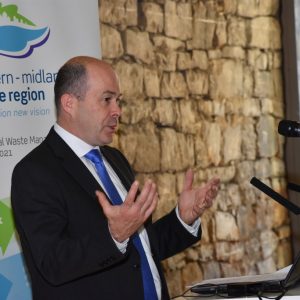 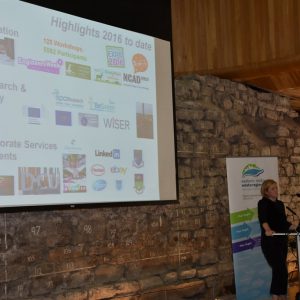